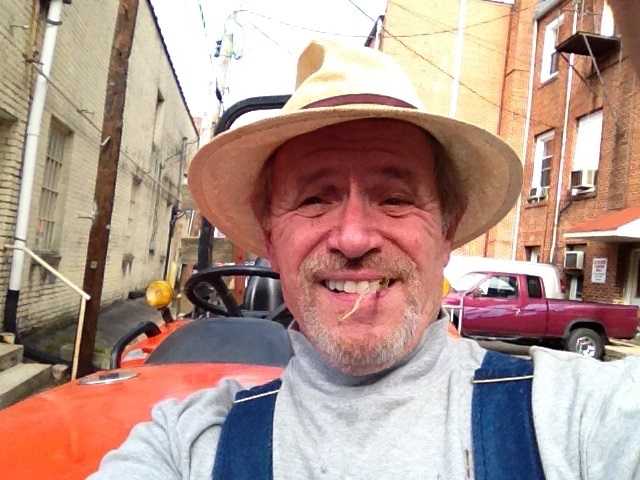 Those of you that grew up around farm tractors and trailers will get a big kick out of this story and the pictures that go with it. As you would well know, when you turn a tractor with a trailer attached, if you turn too sharp, the lugs on the rear wheel will catch on the frame of the trailer.  This is exactly what happened with Farmer Clint in this episode of folly.  Even though he had been operating the tractors on and off for several months, he forgot that it had individual brakes for the rear wheels, and that by locking the outside wheel and turning toward it, he could get out of the bind he was in.  Had a good laugh and took a minute to get it all fixed.  He was a mess!

Three years ago I was invited to take part in the Mineral City Heritage Festival in Spruce Pine. A trusting soul, who shall remain nameless…although I believe it was Chris McCurry…asked my friend Doug if he would provide the tractor for hayrides at this extravaganza. Always the community supporter and overall nice fellow, he consented to loan his farm tractor and trailer for the event.

When Farmer Doug first told me about the “OPPORTUNITY” I believed it was a positive move for Blue Ridge Christian News. After all, it is important for our company to support the community.  “Just think about it, Pollard,” he exclaimed, “Hayrides with Farmer Clint will be a huge success!” I’m still trying to remember how Doug providing a tractor for hayrides morphed into Farmer Clint providing hayrides! To be honest, I was astonished that my pal would subject our town to the antics of Farmer Clint on a tractor. Nevertheless, I began to mentally prepare for the coming out party, “Farmer Clint’s Debutante Ball”, if you willJ.

God protected Farmer Clint on Heritage Festival Day, at least while he was driving local kiddos around on the hay wagon. There were no “near misses”, no scary mishaps (at least none that I will admit), and everyone enjoyed the hayride.

Well, to be totally truthful Farmer Clint’s Hayride was not exactly the headline event others expected L. I sat aboard the tractor from 8:30 am – 1:30 pm and had exactly 2 – that’s right, TWO – hay-riders. The good news…the two little passengers I had were thrilled to be aboard the Farmer Clint Express!

Every now and then, as I sat aboard the Kioti tractor I’ve come to know and love, Starli McDowell, then the Executive Director of Spruce Pine Main Street, would stop for a visit. Actually I think she was hoping to collect the vast wads of cash I amassed to support the new Central Park project on Lower Street. I am happy to report that I gave Starli the entire $4.00 I earned making trips up and down Oak Street. How embarrassing L.

Starli and I watched Roger Pitman’s mule drawn carriage, a beautiful and majestic rig, make its way up and down the street. Riders, young and old, blew right by old Farmer Clint on their way to pet the mules and board Roger’s mule limousine. It was about that time, as I recall, that Starli suggested, “Farmer Clint, you’re OUTA HEAH!” I looked deep into Starli’s eyes and could tell she wasn’t kidding…Farmer Clint was “The Biggest Loser!” It was time to skedaddle, vamoose, get-the-heck out of Spruce Pine!

Oh how I dreaded the LONG drive from Lower Street to my home in Minpro…nearly 2.5 miles of torture. What would I tell my beautiful bride Kay? Rejected and dejected, my Farmer Clint overalls drooping,  I eased the trusty Kioti and trailer into the flowing traffic. My thoughts were of unfulfilled dreams, dashed hopes, and public humiliation. And then, I mused to myself “Don’t run over anyone with this tractor!” Then, “I hope there’s no traffic when I try to cross Hwy 226S.”

As I meandered down Upper Street people began to call out to me, “Hi, Farmer Clint!” Cars and trucks honked and waved, I returned the gestures. As I motored past The Market on Oak, Shirley Hise and others waved excitedly at me…Doug Crosby, Mark Meadows’ Regional Coordinator, called out to me…Syvana Monroe, Doug’s then-fiancé, smiled and waved happily. And I thought to myself, “What a day for Farmer Clint!”  I was baaaack J!

Arriving home safely I decided to position the tractor and trailer in a way that would make it easy for Farmer Doug to rejoin it to his truck.

Now earlier that day, recall that I had been warned “Farmer Clint, DO NOT MAKE TOO SHARP A TURN or it will jack-knife.” I don’t know why Doug is forever barking warnings to me!

I drove the tractor into our lower lot, thinking…”I will just do a circle, and get everything lined up for Doug; that way he won’t have to hassle with it when he comes to fetch the equipment.” Well, I made a circle as planned…WHAM! The tractor groaned and belched, the trailer spun, the wheels spit sod and dirt in my face…I was stuck! Better said…on a scale of 1 to 10…this was a perfect 10 jack-knife.

Déjà vu to that earlier rebuke, “Farmer Clint, DO NOT MAKE TOO SHARP A TURN or it will jack-knifeL.” I was frantic, had no idea what to do…so I did what came natural, I gave the Kioti more gas, pedal to the floor…wheels spun, then hung-up on the tongue of the trailer. It seemed like the tractor wheels were sinking ever deeper into the soft soil.

Dang it…rats…doggone…now what????? I looked to heaven and said, “Lord, not now…don’t let me screw up now! I don’t want Doug to have to bail me out AGAIN!” But the harder I tried the worse things became. This tractor was STUCK…the trailer was eternally affixed to the tractor tire…and, for all I knew, it was about to plunge to the center of the soft earth.

Well, I disembarked from my stuck machine and crawled along the ground, wondering if I could lift the trailer to straighten it out…I conjured up ways that I could hook that tractor to a rope and my waist, then pull it straight…all without breaking my back. Nahhhhh, it was a lost cause and I needed to face the music with Kay.

I found her in the bedroom getting all gussied-up, preparing to attend the Festival. Perhaps it was my despondent facial expression, maybe that sickly smile and hunted look that comes upon me whenever I mess up…regardless, she asked, “What in the heck is the matter?” So much for surprise.

Calmly, expertly I explained that the farm equipment can be very finicky…and, after all, I am inexperienced with some maneuvers…and that grass in our lower field is rather soft…AND I was now hopelessly stuck. “The good news,” I said feigning humor, “is that it could be viewed as rural yard art!” Kay could tell my heart wasn’t in it.

Then I imploded…”I hate myself, I can’t do anything right, why couldn’t I be successful just once…I want to be someone else. I want to leave here and never come back!” Gently, tenderly Kay inquired, “Who would you like to be? Where would you like to go?” “I don’t know,” I bellowed, “but I’m not telling Doug about this!” Gently, tenderly Kay replied, “Yes you are. Doug knew what he would get when he asked you to do this event. He can fix it, you’ll see.”

Why, Lord, is the woman always right?

We walked down the hill together; she gazed in amazement at my debacle. After a while we began to chuckle, well she chuckled more than I did! “Doug can fix it, you’ll see,” she reiterated.

Given a choice, I’d much prefer to have a dozen root canals than explain ONE MORE plight of idiocy to my friend Farmer Doug.  So, sheepishly and cowardly I sent him a TEXT message…”Tractor stuck…HELP!”  (Call me a chicken if you must, but it was a heck of a lot better than head-to-head admission!)

Minutes passed, then a half hour…still no reply from Farmer Doug. I remarked to Kay, “Well, that’s it…he’s done with me. As Popeye always said, ‘That’s all I can stand, ‘cause I can’t stands no more!’ I’ve finally driven Doug over the cliff!”

Gently, tenderly she said, “Doug can fix it, you’ll see.” 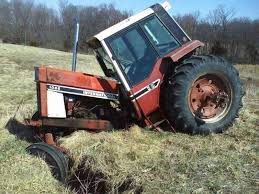 Staring into the Eye of the Tiger

When we arrived Downtown Spruce Pine I told Kay, “You feel free to check out the festival while I face the music with Doug.” She patted my back and wished me luck.

Farmer Doug was peddling homemade Harrell Hill Farms molasses out of his truck bed as I made my tentative, stealth approach. I walked briskly toward him, then slowed to a mere snail’s pace…unsure how he would receive me. His eyes did double duty as he looked at a molasses buyer with one eye while peering at me over his glasses with the other. Uh oh!

The customer left and I did the only thing I knew to do…I swooped in on Farmer Doug and gave him a bear hugJ. “Pollard, I had to laugh when I got your TEXT message,” he began. Poised to strike and defend myself, suddenly the air exploded from my lungs; as if a hot air balloon expelled it’s lift. “Doug, I was trying to get the tractor…” He put his arm around my shoulders, drew me close and said, matter of factly, “Not a problem. I’ll just put it in 4-wheel drive, lock down the wheels and move it out.”

I was immediately insulted…”What, do you think I don’t have it in 4-wheel drive? Do you really believe I am that stupid???” Always the teacher, he again smiled that crooked grin, looked at me over his glasses, and remarked, “Well, we know you’ve had challenges with 4-wheel drive in the past.” Oh sure, now he’s remembering the time I nearly burned up “Blackie the Jeep” on some danged mountain, thinking I had it in 4-wheel drive and didn’t!

I was greatly relieved that my friend didn’t disown me; delighted that his renowned sense of optimism remained intact. Somehow he always gives me hope when I am overwhelmed by dark clouds. But, truth be told I didn’t care how he did it, I just wanted this nightmare to end.

It took Farmer Doug approximately 3 ½ minutes to dislodge his tractor and trailer from the quicksand that WAS our lower lot. But, always the gentleman and friend, he remarked, “Pollard, every bit of advice I give to you comes from having made lots of mistakes. So don’t feel bad, I’ve done exactly the same things and then some!”