One Stone Upon the Next

“Therefore, whosoever heareth these sayings of mine, and doeth them, I will liken him unto a wise man, which built his house upon a rock. And the rain descended, and the floods came, and the winds blew, and beat upon that house; and it fell not: for it was founded upon a rock.” – Matthew 7:24

Block upon block, stone upon stone, the process can be extremely laborious when working with masonry. It would be all the more easy to throw up a building built with any other foundation, like a pole barn for example. But for a long-lasting, secure underpinning, one must work with the bedrock of building materials. It can be very taxing upon the body, especially when you don’t lay block or stone for a living. Slowly, one block, one brick at a time, the wall begins to take shape. As I step back and wonder if it will ever get done, a message from the past floods into my mind. It’s the voice of my father speaking in my ear, “Once you get it down, you’re done, and you’ll never have to do it again. It may take a while, but you’ll get there.”

Walking in faith is likewise never easy. One step at a time, another scripture memorized, another theological lesson learned and soon, like a stone wall, your pathway begins to take shape. We are continually and will forever be tempted in our earthly bodies by the world in which we live. Yet, we can stand firm, like that rock wall, withstanding the floods and winds of storms that crash against us.

Many years ago, there was another time when I worked with masonry. Then, as now, the feel of the mud, the right consistency, the flow of buttering the stone, then finding it in place, all come back like something ingrained in who I am. The more I worked with it, the more it felt natural. Eventually, I would learn that it was more than just a feeling, it was part of my heritage.

It was no wonder that our ancestors from the Waldensian Valleys were renowned masons. The word Waldensian simply meant, “People of the Valleys.” The valleys consisted of a 25 square mile area of the northwest corner of Italy, known today as the Cottien Alps.  Living at an altitude where there was always more stone that timber, the natural selection for building material became stone. The ancient villages with the slate rooftops and stone walls speak to a life of living in hardships but being prepared for them as well. The harsh winters required a dwelling place that could withstand the rigors of months of snow and freezing cold temperatures.

For centuries, they continued to build their homes, barns, and landscaping using the stone that God had provided. Likewise, their faith was based upon the granite bedrock from which they drew strength. They had received the word of God from the Apostles, and as such, held it dear to their hearts. They had become known as the “People of the Bible,” because of their memorization of scripture. Families would commit entire books to memory so that when a community came together, they could recite the entire Bible by heart. For nearly a thousand years, they had been persecuted by the Holy Roman Catholic Church. Their crime was sharing the gospels outside the church walls and possessing the Word of God. For to know the Word to the point it is within you, there is nothing else you can do but to do as the Bible says, “Go ye therefore, and teach all nations, baptizing them in the name of the Father, and of the Son, and of the Holy Ghost.”

Yet, they never wavered. The people of the valleys kept the light of Christ alive until the day would come that they could build the bridge that would carry it beyond the valleys into the rest of the world. Their evangelism would spread to all of Europe. From there, and over many centuries, until the Reformers would pick up the mantle and carry forward from that point.

When these Waldensians came to America, where they founded what would become known as Valdese, North Carolina, they brought with them their inherent talents, one of which was being natural masons. At first, they seemed turned away from who they were in more ways than one. Having no longer been persecuted, it was easy for many of them to eventually join a denomination that didn’t demand the same attention to faith as their ancestors that had died by the sword. So too were they eager to leave behind the toil of working with stone, and instead, tried to build homes made only of wood. Before long, when they finally had time to regroup and reflect more on who and what they were, many went back to working with stone. From there, many churches and WPA projects in and around Burke County were either built or enhanced by these ancient stone smiths from the valleys. But even more dramatic was that some would return to that ancient faith and find more compatible churches to attend. Like myself finding an inherent talent that I didn’t know existed, these Christians of old would return to what felt natural, as they had always done, worshipping God based on the spirit and truth, the Word of God.

It was this worshipping God as Christ had asked that determined their course in destiny. “Therefore, whosoever heareth these sayings of mine, and doeth them, I will liken him unto a wise man, which built his house upon a rock.”

The Waldensians place in the history of Christianity was that of an Ark, of sorts, for the Word of God, a place where God prepared a people in a place that would allow them to protect this word and preserve it until a time when the rest of the world was ready to receive it.

When Andrew took his brother Simon to see Jesus, the first thing Jesus said to him was, “Thou art Simon, son of Jonah, that shall be called Cephas.” The Greek word for Cephas meant stone, or even more precise, a little stone. It was this little stone that Christ would build his church upon, which he himself was the cornerstone; one stone upon the next.

It would seem a bitter irony that a man from Lyon France, a wealthy merchant, would sell everything he had to turn to an Apostolic way of life after hearing a traveling troubadour sing about a people from the valleys who lived out their faith as in Apostolic times. Once he heard this tale, he was determined to live and preach the word of God from that point forward. Yet, if he had used his real name, his family would have been persecuted and killed, again because it was against the law of the church-state to do so. So, to hide his identity, he became “Peter Waldo.” The name simply meant a little stone from the valleys. This “Peter of the valleys,” would go on to lead many in Lyon to Christ and would eventually have to flee to safety to the same valleys from which he took his name. Some historians would tell you that this was the beginning of the Waldensians, but it couldn’t be further from the truth. Knowing that they could not destroy the people of the valleys by force, for they had tried and failed so many times, eventually, the Catholic Church would use the Peter Waldo tale to sway people away from the truth. When Satan gets a foot in the door, he not only takes an inch but will always take a mile.

Sadly, the story is perpetuated even unto today; some by people who are ignorant of the truth while others purposely continue the lie to diminish the true connection of those ancient people of the valleys to the disciples. Without a doubt, the ancient Waldensians can be traced back to the time of the Apostles, even though their persecutors tried to eliminate or destroy any proof thereof. A good starting point for anyone wanting to research the truth can be found in Ted Alexander’s book, “The Waldenses, of Whom the World Was Not Worthy.” Even with the persecutor’s attempts to hide and slander the truth, one can still search into ancient documents today and find clear evidence of Apostolic ties.

It is no wonder that with the ancient Waldenses connection to the Apostles, many denominations seek them out as their forefathers of faith. The Peter Waldo story was and is still today created to perpetuate a false story which is to diminish this fact, that the ancient Waldensians were the link to the original word of God having received it from the Apostles. If it were not so, the Catholic Church could, and does claim to be the sole inheritor of these rights. Ironically, what the Catholic Church tried to kill never died. Their persecutions of these simple valley people became the voice of martyrs, whose blood planted the seeds of the Reformation.

As we have seen, and hopefully now you too can understand, how those ancient people of the valleys persevered for centuries when they held their faith close to their heart. When the flames of persecution lessened, so did their vigilance. Today, we face the same lessons. When we give in to the world around us, we weaken our diligence to fight the devil. We must not fall away from our focus on the word, for as it is written in Ephesians 6:12, “For we wrestle not against flesh and blood, but against principalities, against powers, against the rulers of the darkness of this world, against spiritual wickedness in high places.”

We can never forget the past, should we be tempted to repeat it. To diminish the truth is to void Christ of all that he did to be the salvation for all mankind. It is up to us to carry on the truth, for it is written, “The father seeketh those who worship him in spirit and in truth.”

Do not let the light of Christ go out. Carry on the work of those distant forefathers and speak boldly to others.

Remember, one stone upon the next is all it takes.

Their salvation is in your hands.

Lux Lucet in Tenebris. The light shines in the darkness. 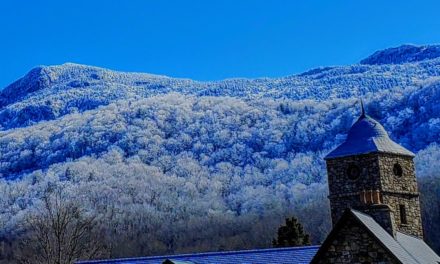