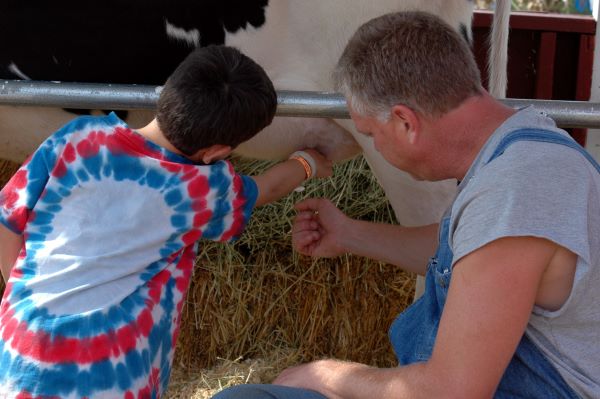 Cast into your mind the melody of “Wayfaring Stranger,” playing as an instrumental number. It’s solitude, its loneliness preparing you for what comes next. The words begin to meld into the memory as one and together present a cinematic scene so forlorn, so haunting; you cannot help but be drawn in.

“I am a poor, wayfaring stranger…”

Gray skies overcast the scene before me.

Like a cloud of disbelief, the entourage of man, cattle, and feline moved slowly into the beckoning opening of the dairy barn. As a methodical procession, in some unforeseen rhythmic cadence, their existence moved as one. Some sense an urgency being pressed upon them by their natural state, to be milked, another the knowledge of labor from which life itself is sustained, and the latter, the offering of something to which they had not labored but only entered into another’s toil. The beasts, united by nothing more than the instinctual desire for relief of pressure and the welcoming call of hunger being satisfied therein, came willingly. Their solemn lowing as if greeting the time answered only by the cats’ thirsty meows. The solitary man, his thoughts straggle along like those hooved footsteps before him, recalls the past when so many more had been with him – beast and child. For this day, another young soul, his eyes fixed upon the moment, would unknowingly forever have this scene etched into his young memory. The elder didn’t dwell on what the grandchild might remember, only that he was proud to have him tagging along – another one that he might share the love of being connected to God’s creation through the lifelong servitude to farming – providing for others what they cannot fulfill of their own accord. There had been many other grandkids, many other children to which he had shown this daily routine. Some had helped when they were old enough. Others found it nothing more than a novelty – an exercise in the quainter side of life. Yet, the one that watched with longing eyes had the soul of an old spirit, one that appreciated more deeply the things to which he was shown – reasoning the old man could appreciate.

The shadow of the barn’s darkness encapsulated their entourage as they entered. The dusty, fly-specked windows added to the grayness of the light. Like spectral images, the cows one-by-one found their own stall. Wandering to the long concrete trough built into the ancient floor, they began mouthing the sweet-smelling grain the man had placed earlier, long before they had been called. Only when he had prepared their table for dining would he step out of the barn and painfully walk to a point where he knew they could hear his call. His high-pitched shrill, “Sook cow,” echoed off the other outbuildings, ringing into the foothills. They would come as if summonsed from another time, ambling slowly, milk bags swaying as their procession made its way down the long lane, which was bordered by matching wooden fencing on both sides. The Catalpa trees shadowed their walk, like pillars to the sky, their gray trunks, now amid winter’s late clutches.

And the song continued, “Traveling through this world below…”

They had heard of Jesus’ healing powers. Like strangers from the midst, they came. The Passover, the feast of the Jews was nigh when Christ went up on the mountain to sit with his disciples. From whence he came, most did not know. For this day, he had arrived to serve those who could not provide of their own accord. Unlike the farmer, he had not beckoned them, yet they came seeking to be healed, misguided by their misunderstanding of His message. For what Jesus sought was to provide for them that they might see the miracles and believe Him when he spoke of eternal life, a place where He would go and prepare a place for us; a place where disease and mourning would have no home.

Meanwhile, the melody plays on, “There is no sickness, no toil, nor danger in that bright land to which I go…”

As Jesus sat with his disciples in supposed reclusion, themselves alone, and discussed all that had been said, all that had been done, he soon realized they were not alone. “When Jesus then lifted up his eyes, and saw a great company come unto him, he saith unto Philip, Whence shall we buy bread, that these may eat? And this he said to prove him: for he himself knew what he would do. Philip answered him, Two hundred pennyworth of bread is not sufficient for them, that every one of them may take a little.”

One of his disciples, Andrew, Simon Peter’s brother, said, “There is a lad here that hath five loaves of barley and two small fishes, but what are these among so many?” What came next was a miracle to which none other had yet to be compared, the feeding of the multitude, some say far greater than five-thousand. And yet, what became of the lad who had offered to share his lunch? With eyes of wonder, he indeed beheld the miracle that transpired. For the rest of his life, as a baseline for living from that day forward, he would forever be changed.

The child watched his grandfather continue the routine operation of milking the cattle. His eyes were like a sponge unto his mind, absorbing all that he could, impressing this time with his grandfather upon his soul. Etched into his heart, the scene before them began to unfold.

Sitting his short-legged stool near the cow’s side, the man grabs the well-worn rag from the edge of one bucket, washes it around in the solution, wringing it out with hands of age and firmness until it was only damp to the touch. He would then wipe down the underside of the cow’s bag and all four of her udders. Placing the rag back on the edge of the bucket, he would then grab the milk bucket, the stainless still container, and put it underneath. Those ancient hands, so firm but so gentle, would then begin the process of milking.

Here and there, the old girl’s tail swats instinctively at an unseen fly. The elder reaches up to remind her of his presence, and the rhythmic process continues. The streams of bountiful creaminess are seen and heard as their initial crescendos pulsate into the pail. Like beacons of hope to the ears of those feline onlookers, the cats come running to the backside of that man and beast coupling. There they sit, licking their whiskers in anticipation, some yawning as if to say we are tired of waiting. When the milk bucket is nearing capacity, the supple hand gently begins shooting streams of the rhythmic pulsations to the furry onlookers. Their faces become plastered with the creamy goodness. The grandfather’s aim is perfect. The years of practice have served him well, as the ungracious recipients accept their welcome nourishment. Overwhelmed with the delectability of that fulfillment, the cats begin to stand on their hind legs, reaching for the whimsical ever-rising stream the farmer playfully spreads. Finally, the last remnants of her utter contents are relinquished into the pail, and once more, he wipes down the flesh of her underside. Before moving onto the next beast of the field, he reaches up and unhooks her collar from the bindings.

Meanwhile, she continues to chew the delicious grain as grandpa slides over to the next stall and repeats the process. Eventually, the cats, being filled with their beggar’s meal, wander off. Some stop nearby and begin the cleaning process, their faces first, wiping the bounty from their whiskers with wide-tongue swipes. Lazily, they find their favorite nook within the confines of the barn – their sanctuary from the world.

Frantic to be in his presence, to be fed once again, the crowd of witnesses took shipping over the sea of Galilee to find Jesus on the other side of the sea. When they found him, they had yet to realize the significance of the miracle. They only saw it through the natural eyes of man, the instinctual existence of being fed for the profit of the flesh, unbeknownst that they had just received a feeding of the spirit – the true intention of Christ. “Jesus answered them and said, Verily, verily, I say unto you, Ye seek me, not because ye saw the miracles, but because ye did eat of the loaves, and were filled. Labor not for the meat which perisheth, but for that meat which endureth unto everlasting life, which the Son of man shall give unto you: for him hath God the Father sealed.” So often, those who pursue the concept of Christianity without seeking the relationship with God are merely acting as those barn cats or those who had witnessed the miracle of the feeding of the multitude. Their commitment was simply at face value – they had no skin in the game, as the saying goes. Unlike the disciples, those on the periphery of belief were there for the freebies, for the show, and for what they could get out of it that would satisfy their earthly needs.

And the haunting strains of the song continue, “I know dark clouds will gather ’round me, I know my way is hard and steep. But beauteous fields arise before me, where God’s redeemed, their vigils keep…”

The children would never forget the things they saw that day. Each had been fed, but not from the meat which perisheth, but rather from that sustenance which endureth to eternity. One, a poor farmer’s grandchild, the other possibly an orphan looking to find comfort in the loving arms of a new Father – each having scenes of inspiration unfold before them so that they would be forever changed. Their recollection of that time etched into their souls would be recalled once more to those that would listen. In the autumn years of life, they would speak of a time before, a moment when what was perceived as the simple task of feeding and being fed would become much more than the visceral study, but a lesson of how God’s love for us transcends anything we can comprehend.

As time passes, the children age and become old men. The image in the mirror is not the one in their heart. With backs bent from a lifetime of toil, they look forward to that day to join those gone on before. One would speak of a miracle so profound, so evident that it would be told for centuries to come. Another would speak of merely a simple day in the life of a peasant dairy farmer. Each would tell of a similar moment when compared in the essence of life being provided by God so that the eyes of a child could capture that moment and realize its significance. Their memories would save that event to share with those who would never know that moment in time personally. Still, through their eyes, the retelling could enrich the hearer’s belief, and they too would be fed like that multitude on the hillside so long ago.

In this, we can say without a doubt, “Thanks be to God.”

Timothy W. Tron lives in Collettsville, NC. with his family. He is the former Director of the Trail of Faith in Valdese, where he still volunteers and helps with tours. He is the author of a new Christian series, “Children of the LIght”, with the first book being, “Bruecke to Heaven”, and his recent book, being the second, “The Light in the Darkness”. He is an active blogger, artist, and musician. Timothy also has a BSEE from UF, and is a Lay Speaker. He can be reached at twtron@live.com. You can also visit his website at www.timothywtron.com